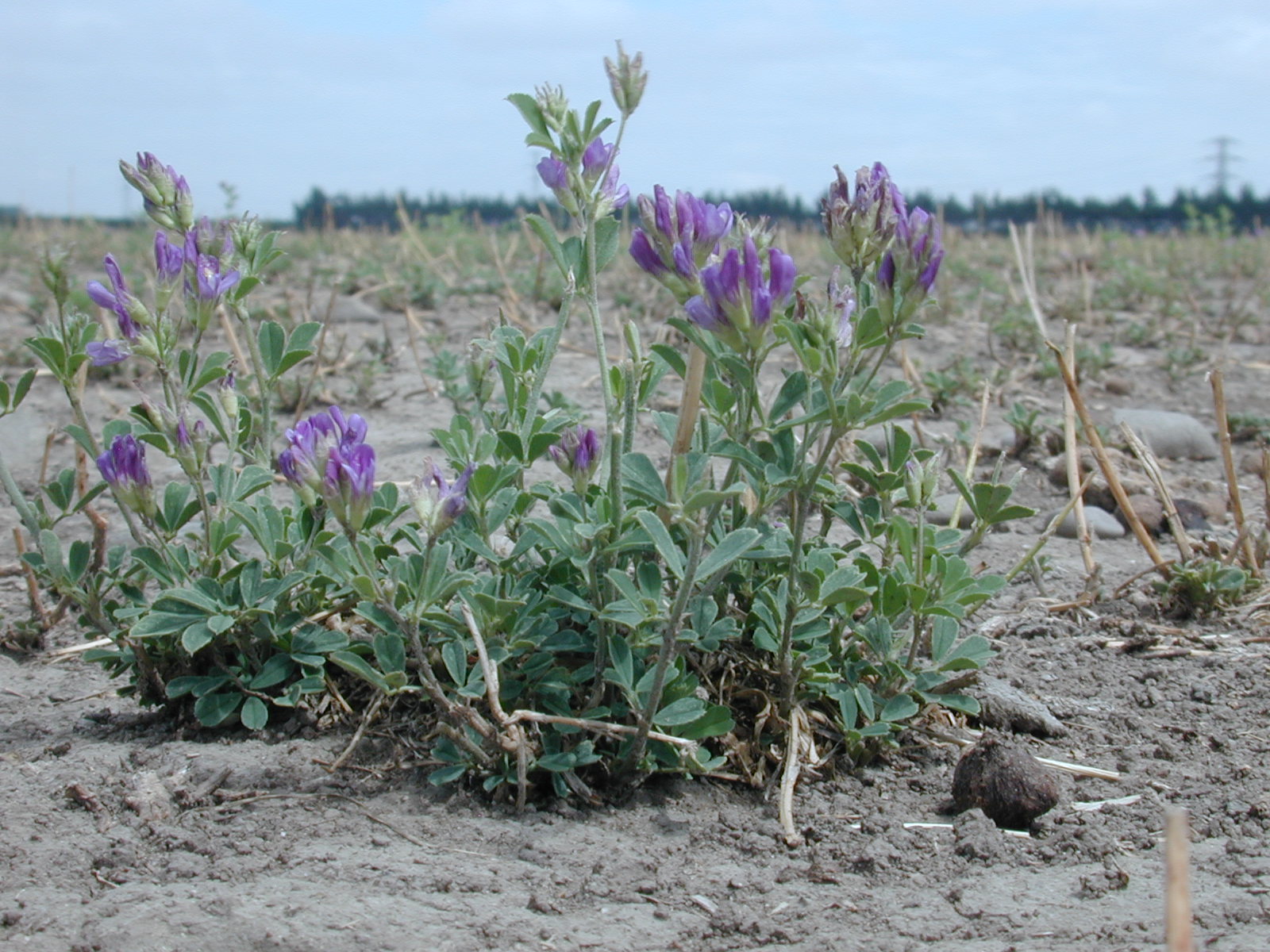 Yes, it’s been a dry spring and summer. Not unheard of in Canterbury but more extreme than normal. At Ashley Dene, 538 mm of rain has been recorded from 1st March 2014 to 28th of Feb 2014. This is about 88% of the normal annual rainfall, but nearly half of it fell last autumn followed by lower than average rainfall from May onwards. Only 153 mm fell over the spring and summer which meant spring regrowth of pastures and lucerne was minimal. Much of the late autumn 2014 and early winter rain simply drained out the bottom of these shallow stony soils. 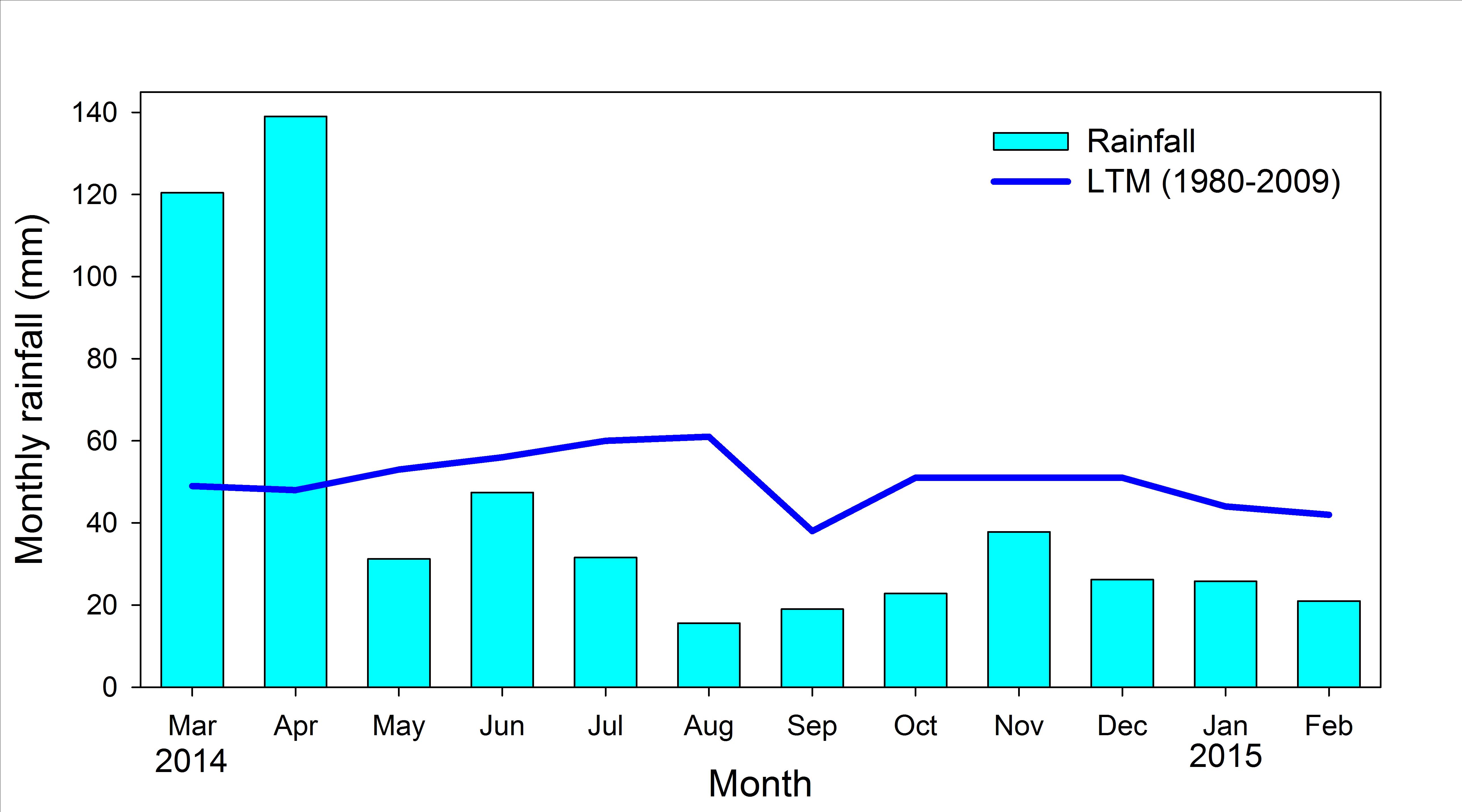 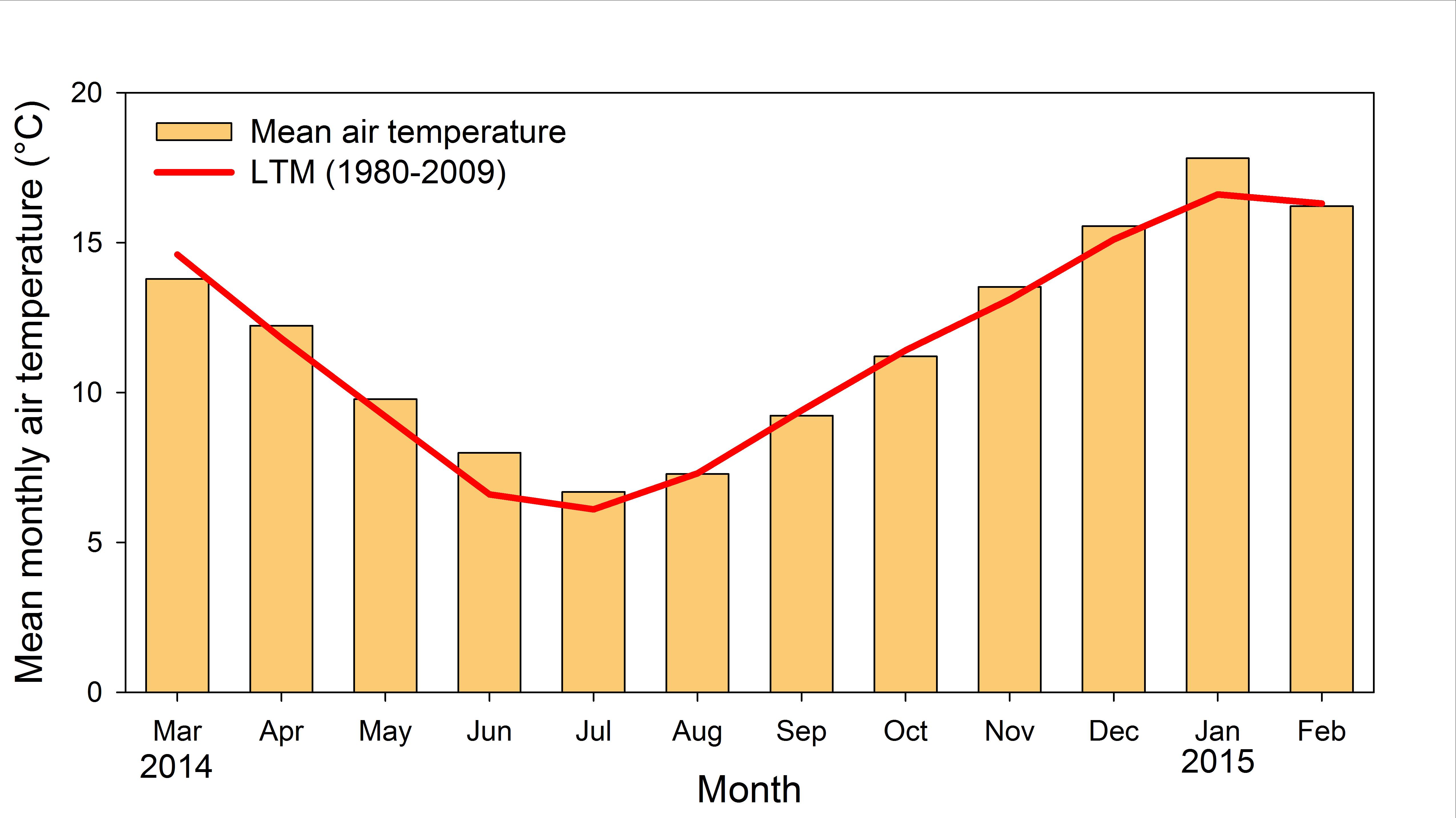 Mean monthly temperatures have been about average over the same period and follow expected seasonal patterns.

The stony soils at Ashley Dene are capable of holding only 100-140 mm of plant available water depending on the rooting depth of crop, pasture or weed species present. That’s equivalent to two months of normal rainfall leading into the spring and summer growth period. With normal spring rain that will keep things green up to December – this season we had to destock the second week of November.

The spring the soil water was already depleted to plant stress levels by end of October (2014) and only the lucerne kept growing into November. For the next four months pastures plants were entirely dependent on the next drop of rain. It came but only at 50% of normal. The high summer potential evaporation ensured that small showers evaporated from the soil surface before the plants could benefit. Plants withered and the soil dried it heated up to over 40 °C because the evaporative cooling of well watered plants stops. These high soil temperatures kill perennial ryegrass and white clover plants. In the pastures at Ashley Dene the cocksfoot has survived and is still showing signs of green but the perennial ryegrass has died. Cocksfoot struggles but more has green material present than in the ryegrass based pastures at Ashley Dene January 2015.

Even lucerne struggled in the stony soils. Its deep roots kept the plant green but there has been little growth under these water stress conditions. The flowering of lucerne appears to happen quickly at this time because the canopy also heats up because there is no moisture transpiring through the plant. Mild water stress does accelerate flowering in lucerne due to these warmer canopy temperatures.

Rain in March of 20 mm+ is needed to reactivate growth from the perennial grasses and legumes. For the grasses there should be sufficient soil nitrogen to allow them to recover from the drought. They should be left to maximize their ground cover after rain to increase autumn pasture cover. However, for pastures with sub clover, the grasses need to be kept shorter to allow the sub clover seedlings to grow. Once the germinated seedlings can survive a finger and thumb pull test then a light grazing is recommended. For lucerne, autumn is when it is recharging underground reserves. So leave the lucerne for at least 6 weeks before grazing. This will ensure it is ready to grow again next spring. Rain in early March may still allow Italian ryegrass to be sown as a winter forage crop in warm regions. However, if you do not get significant rainfall before April then a cereal greenfeed may be preferable.

In practice you cannot leave every paddock on the farm ungrazed or to be treated perfectly so prioritise;
a) to continue to feed out for at least two weeks after a significant (20 mm+) rainfall event,
b) after this sacrifice a couple of older paddocks for flushing/tupping but additional supplement may still be required to get condition on ewes,
c) lightly graze pastures with sub clover to ensure they remain open for the sub to survive once the seedlings are anchored in the ground,
d) graze lucerne after it has had an extended growth period to recover underground reserves,
e) allow autumn sown annual forage crops to grow as much as possible to close their canopy of leaves. This maximize light interception for photosynthesis before cool temperatures reduce leaf extension.

Finally, significant rainfall in March should also encourage browntop (Agrostis tenuis) and Californian thistles (Circium arvense) to be active. This is the perfect time to spray them with a translocatable herbicide, such as glyphosate, to ensure the chemical is taken underground to kill the plants. For browntop, a blanket spray is recommended with follow-up sprays in late autumn and early spring possible before direct drilling new pastures or a forage crop. Weed wipe Californian thistles as they bud in autumn.