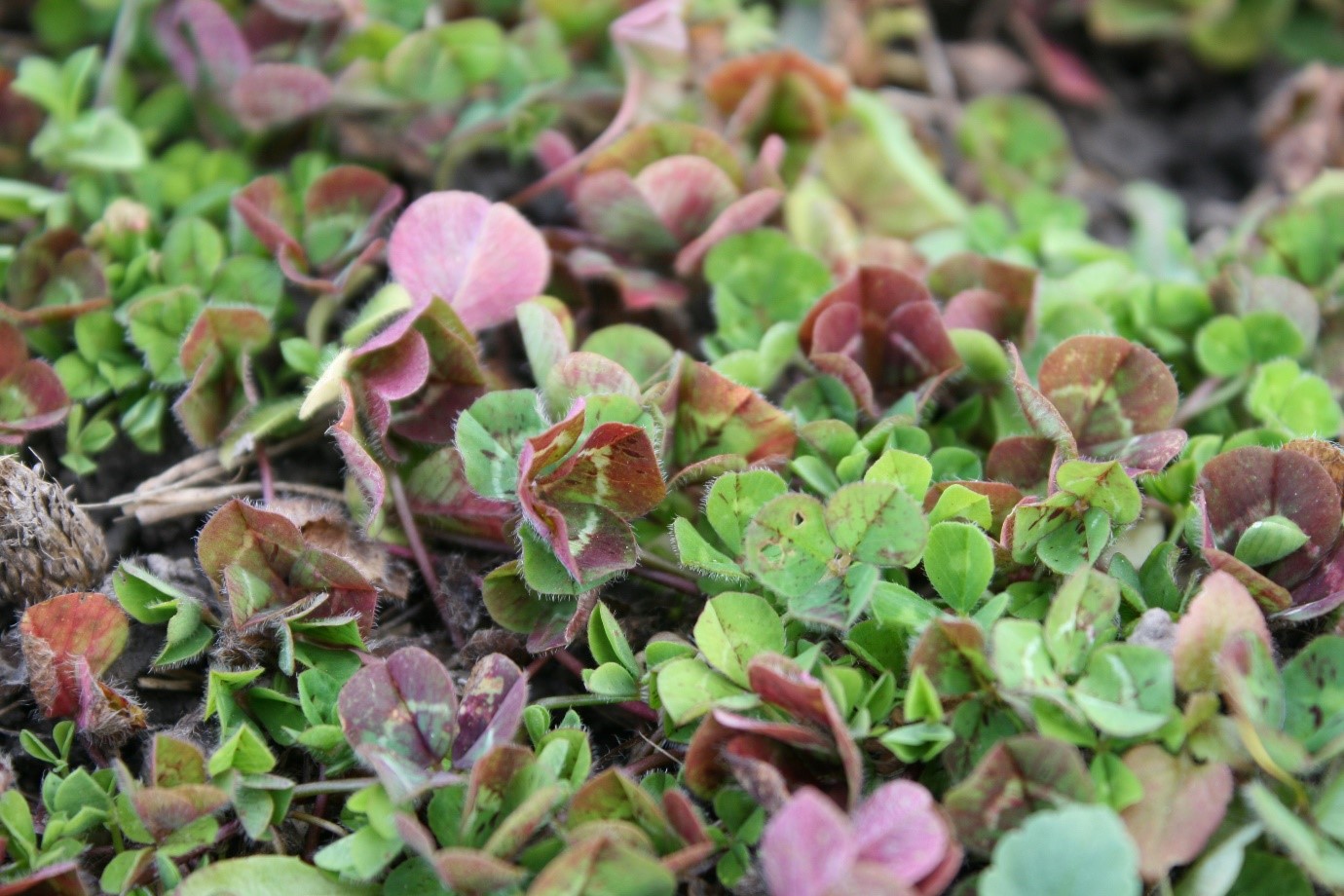 Winter has arrived and this time is associated with Matariki (the Māori New Year), and also marks the shift of the sun’s journey in the sky (see the seasonal photoperiod cycle in Figure 1).
New Zealand’s mild climate allows some pasture growth in most regions in winter months including in the south of the South Island. In Canterbury the pastures are green after 470 mm of rain between March and May this year (recorded at Lincoln University). Nevertheless, lower winter temperatures mean growth is considerably slower than in spring and summer but the adapted temperate annual legumes make the most of the available soil moisture during this period. Cool-season legumes thrive in cooler climates or during cooler seasons, when temperatures are too low for warm-season species to grow. The use of adapted cool-season species can reduce the supplementary feed requirements in the winter months when warm-season forages are dormant. Cool-season legumes such as sub clover can improve animal performance (liveweight production, milk production, conception rate, weaning weight and weaning percentages).

1. Sub clovers in winter
Southern areas of the country are subject to winter frosts, and occasional snow, so it is important to select species/cultivars which are suited to the environment. For approximately two winters we have assessed cool season sub clover cultivar performance. A main characteristic of the sub clovers in winter was that some leaves responded to the cold by changing colour from green to red-purple. Figure 2 shows how ‘Karridale’ sub clover reacted to winter temperatures in 2015 at Iversen field (Figure 1). At that time, the average temperatures were 0.5 to 1.2 °C below the historical June average of 6.5 °C at Lincoln.

So why did the leaves look red-purple? This is because of the role the pigments play in photosynthesis and plant tissue protection. The most common plant pigment is chlorophyll, which is easily recognized because it reflects the colour green. Another pigment, called anthocyanin, is present in the tissues of higher plants but we do not always notice it. Anthocyanin is the compound responsible for the reddish purple colour we see, for example, in some fruits, autumn tree leaves and sometimes in sub clover leaves and stems (Figures 2 and 3).

Anthocyanin synthesis and accumulation in plant tissues has been linked to improved stress tolerance, (e.g. for UVB, drought, cold, or disease, and insect and predator avoidance)1. For most of the cultivars studied, exposure to low winter temperatures for more than seven days lead to anthocyanin accumulation in the leaves and consequently leaf reddening.
This colour change was confirmed again in 2016 when we observed the same foliage reddening events in winter at our Canterbury and Otago experimental sites. Temperatures at Omarama went below -7 °C on ten days last winter. The coldest temperature was -10.4 °C. There was a cultivar effect in the ‘cold sensitivity score’ (leaf redness x proportion of plot affected) but no relationship with subsequent DM production.

Figure 5 shows that the second green trifoliate (at the left side, indicated by the red arrow) gradually developed a red colouration over a two-week period under low temperatures (< 7 °C).

2. Sub clovers are red: should we worry? Sub clover may also develop red foliage under other stressful conditions for example, after an herbicide application (toxicity), nutrient deficiency or extreme drought. These events may not depend on the season. It pays to keep a close eye on the health of pasture species in your paddocks. If you do notice red symptoms and need more information it might be worth seeking technical advice. The right plant diagnosis early on could pay off in the future!

Is it ok to graze an area with red leaved sub clovers?
Research suggests that red leaves are less palatable than green leaves2 and that is exactly the strategy plants use to repel predators and insects and, possibly, some grazing animals. The goat and sheep’s eye is similar to a human eye and can perceive the red wavelength while cattle cannot. As yet we do not have specific data to support that red leaved sub clovers are less palatable than green ones. What we know is that the red leaves have 10 times more anthocyanin concentrations than the green leaves. So far, there is no evidence that those levels would have any detrimental effects on grazing animals. On the other hand, there are studies which confirm the benefits of anthocyanin consumption due to its antioxidant and anti-inflammatory properties3.

3. What is going on this winter?
Sub clovers that regenerated during autumn this year are vegetative and showing the winter red foliage (Figure 6). Our research plots currently have 1 to 15% of plants with the red symptoms caused by the cold. Minimum daily temperatures around 5 °C are likely to continue for the rest of June, which may well stimulate more red foliage development. NIWA forecasts a “near average winter” in both North and South Islands with equal chances of below and above average temperature and rainfall in 2017 (see reference below4). We should expect more red foliage development throughout June-August.

The good news is that after the 21st June the days will become longer and with an increase in photoperiod we will have the chance to observe more sub clover changes – not only their colour but also their phenology as they slowly progress from the vegetative to the reproductive phase. We will talk more about that in spring time!