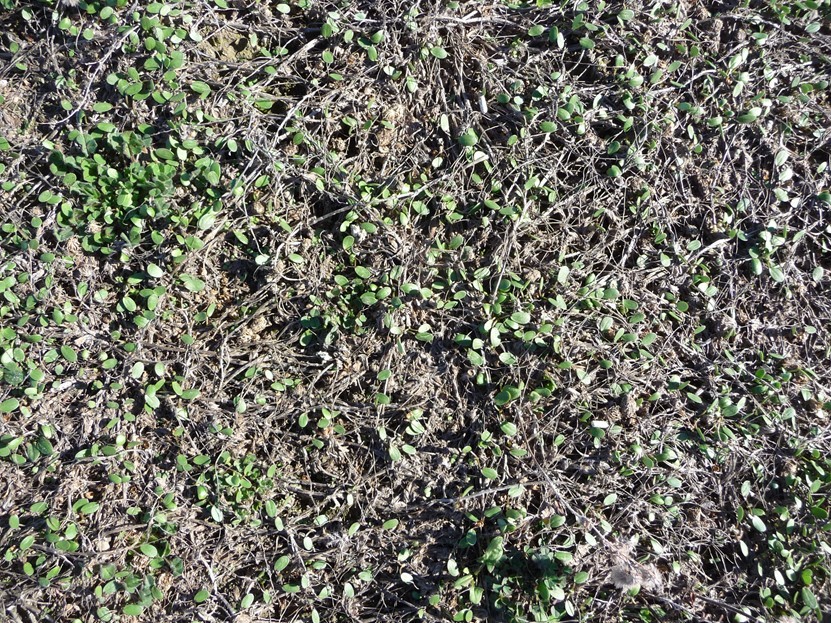 About 4 million hectares of sheep, beef and deer farms in New Zealand are suited to sub-clover. These areas have an average of at least one month of summer drought each year.

Sub clover is a long-term resident

In many dryland pasture areas in New Zealand, the sub clover cultivars ‘Mt Barker’ and ‘Tallarook’ have been ‘resident’ since the 1930’s when it was used extensively on the plains and easy country(3). Now that its value is better understood, farmers are changing their grazing management to maximise the reestablishment, growth and spread of these resident sub clovers (Plate 1).

In New Zealand up to 12 newer sub clover cultivars are currently available(1). This is a sub set of the 45+ cultivars registered in Australia(2), where we import seed from.

Direct-drilling and oversowing sub clover was discussed by Dick Lucas in the last blog ‘Managing sub clover in spring’(4). If this is an option for you, then which of the sub clover cultivars currently available are the best?

To choose the right sub clover cultivar(s) it is helpful to understand the main agronomic characteristics that differentiate them. In this blog we are focusing on subspecies, flowering time, length of growing season, and hardseededness.

There are three subspecies of sub clover: brachycalycinum, subterraneum, and yanninicum. The subspecies vary in their morphological attributes e.g. stem and leaf hairiness, seed colour and burr burial ability(2). In terms of matching subspecies to environment, they also vary in their tolerance of soil pH and drainage. The brachycalycinum subspecies is reportedly less tolerant of acidic soils while yanninicums favour poorly drained soils (Table 1).

Most of the sub clover cultivars in New Zealand are from the subterraneum subspecies, including the long-term residents ‘Mt Barker’ and ‘Tallarook’.

Sub clover subspecies subterraneum and brachycalycinum have shown good establishment and production on Sub 4 Spring dryland experimental sites. Cultivars of the yanninicum subspecies have not performed well possibly because the soils have not been their favoured site (i.e. waterlogged or poorly drained).

The sub clover cultivar ‘Antas’, a brachycalycinum, has also performed well on more acidic soils where soil pH has been 5.4 to 5.5.

The topic of sub clover seed hardness was discussed by Carmen Teixeira in a blog post last year(5). Having a hard seed coat is a characteristic that prevents germination during unsuitable conditions such as low soil temperatures and inadequate soil moisture.

The hardseededness of sub clover cultivars is rated on a scale from 1 (least hard) to 10 (most hard) that was developed in Australia(2) where hard seed is a desirable characteristic for the long dry hot summers. Essentially the ‘harder’ the seed the longer it takes to germinate.

Sub clover cultivars in New Zealand have a hard seed rating of 5 or less with the more recent cultivars tending to have a higher rating than the older cultivars(1). The most successful cultivars have been the ‘soft seeded’ ones such as ‘Woogenellup’ and the long-term residents ‘Mt Barker’ and ‘Tallarook’. These cultivars have hardseed ratings of 1.

At Lincoln this year we have already observed a false strike event after two significant (> 20 mm) rain events in January (Figure 1). A false strike happens when sub clover seed germinates and the seedlings emerge but do not survive and establish if there is then a no rain to provide sufficient surface soil moisture (e.g. in late January and early February, Figure 1).

Sub 4 Spring experiments in Canterbury have shown that after summer rains the soft seeded sub clovers (e.g. ‘Woogenellup’) had approximately 5% of seedling emergence while 95% of the seed remained ungerminated in the soil seed bank.

Seedlings that emerge very early in the season may eventually die if there is no rain (Plate 3). But don’t panic because the hard seeds that remain ungerminated in the seed bank will ensure subsequent germination in autumn.

On the other hand, if weather conditions are favourable then the early establishing cultivars have the ideal conditions for fast canopy development.

When sowing mixtures of sub clover, avoid having cultivars with hardseededness ratings of 3 or higher.

Flowering time and the length of the minimum growing season are discussed together because there is a strong positive relationship between these two factors (Figure 2). Early flowering sub clover cultivars, such as ‘Monti’ and ‘Bindoon’, need fewer months to complete their lifecycle compared with later flowering cultivars such as ‘Leura’ and ‘Tallarook’.

Where a resident sub clover seed bank is present in the soil, or sub clover has been sown, the growing season starts with seed germination after an initial rainfall of > 20 mm and sufficient rain thereafter to allow establishment and survival. In dryland areas the start of the season can vary from January through to May (Plate 4). Also there may be multiple germinations of sub clover during this time resulting in a range of plant ages.

The sub clover growing season ends when the summer dry begins. By this time sub clover has hopefully grown sufficient herbage to feed the lactating ewes, flowered and buried its seed burrs for the following season.

Growing season versus length of the dry season

The length of the growing season varies by location but also from year to year. For example, at Omarama in 2016 the germination of sub clover seed drilled in February happened almost immediately and growth continued through to mid-November resulting in a growing season of nine months and sub clover production was 3 tonnes DM/ha. In 2017 germination did not start until mid-April and growth finished in late September due to lack of rain. The growing season was about five months long and there was not sufficient sub clover herbage to graze in the spring. The best patch of sub clover yielded 900 kg DM/ha.

Across New Zealand there is a continuum from very dry areas, where the perennial white clover does not survive and sub-clover is dominant, through to summer moist areas where white clover is the best adapted legume in permanent pastures.

The ‘length of dry season’ concept is the best integrator of several important components, such as seasonal rainfall and evapotranspiration, soil water-holding capacity, slope and aspect. Total annual rainfall is a not a helpful indicator of areas more suited to sub clover. For example, there are large areas in the North Island where sub clover is present and the annual rainfall is over 800 mm. In these locations sub clover is commonly found on the drier north and west-facing aspects of hill country paddocks while white clover is found on the more southerly facing shady faces. Such topographical variation in legume species can offer a challenge to grazing management practices.

In New Zealand the length of the available growing season varies by location and also from year to year. Not every year will be a bumper one for sub clover.

To cope with seasonal variability, it is advisable to use at least two cultivars with one having a mid-season flowering date and the other being late season.
The following sub clover mixtures, for the length of the summer dry, were described by Derrick Moot in a blog post last year(6). Flowering date (E = early, M = mid, L = late and VL = very late) and hardseededness rating (1 = low, 5 = high) are in brackets after each cultivar:

Sow a mix of sub clover cultivars to cope with seasonal variability. Use at least two cultivars with one having a mid-season flowering date and the other being late season. Also avoid having cultivars with hardseededness ratings of 3 or higher.