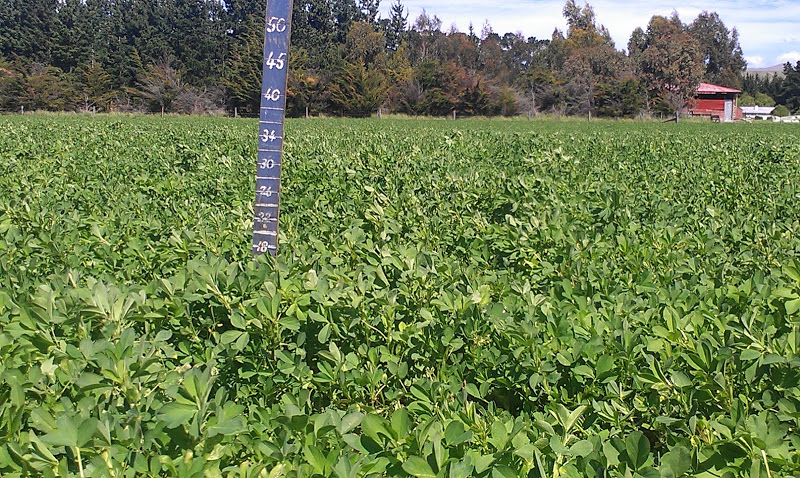 Jeffries Front Flat has been spelled from the grazing rotation for 40 days to enable the Avery’s to apply a weed spray, and re-grow before the next grazing. The paddock was grazed down to an approximate height of 2 cm before applying the chemical. Because this was a late spray the stand was not grazed hard as you would for a winter clean-up spray. There is a balance between protecting the spring emerged growth points at the base of the plant and removing enough lucerne herbage to expose the weeds, and reduce some of the leaf area of the lucerne to prevent excessive damage from the chemicals. The spray was applied straight after the sheep were removed from grazing, usually there is time to allow the weeds to freshen up, but with the late spray the lucerne was growing too well, and would have been knocked by the spray too much.

The following spray mix was used on this paddock:

The above chemical was applied with a water rate of 200 L/ha to ensure good chemical coverage of the weeds at the bottom of the stand.

This paddock is also used for Torlesse seed production, consequently this late spray has been essential to ensure that the resident weeds are controlled – to protect the certified seed status.

Some of the resident weeds were as follows:

Doug and Fraser find Annual Poa to be a particularly frustrating weed to have within the pasture. Doug and Fraser agree that it is probably the worst plant at converting valuable soil moisture to palatable dry matter. It also seems to take advantage of bare ground and will re-seed and establish prolifically, if given the chance. It is therefore a common weed of lucerne stands due to the amount of bare ground exposed when lucerne is dormant.

The spray looks to have been very effective at killing the weeds, with only bare ground and dead weeds showing between the lucerne plants. The lucerne looks to have stood up to the late spray well (photos below), but is not usual recommended practice. Only a small amount of chlorosis (yellowing) of the leaves is evident in a few plants dotted through the paddock.

The paddock is just about due for another graze, the mob that is to go into Jeffries Front Flat was currently grazing next door and were due to come in on the 23rd October. The average pasture height was 18-20 cm when we visited.

Derrick Moot was up in Marlborough last week visiting the various farmers in the Technology Transfer Project. He and Doug were discussing the neighbouring paddock to Jeffries Front Flat (photos below). This paddock is currently being grazed by 200 ewes + twin lambs and 25 bulls. The paddock was initially split in two with a hot wire and grazed separately, you can see the line of the first break in the photos below. Salt is being fed to the stock, but additional fibre is not required within this paddock. The lucerne had enough stalk present to provide sufficient fibre. However, if there was a rainfall event followed by warm sunny days, then the lucerne is likely return to a lush state, in which case fibre would be essential. 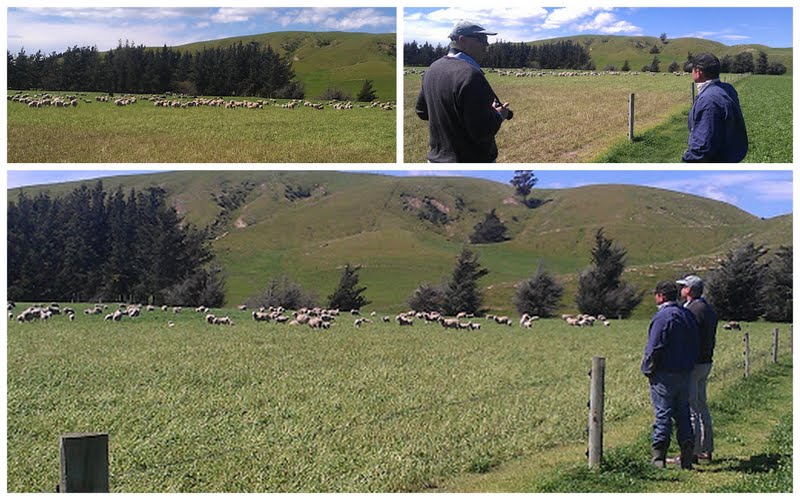