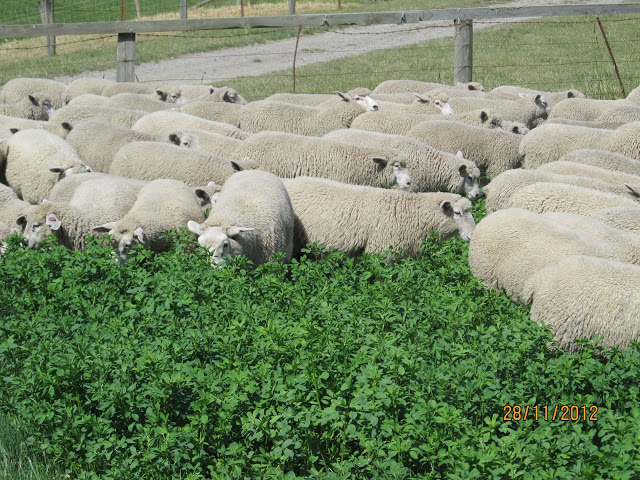 Jeffries Front Flat is being grazed again with 350 ewes and their triplet lambs. This mob will be removed from Front flat once they had been weaned (end of November). The plans for this paddock is to have one more graze within the rotation, and then it is shut up for certified seed production.

There has been one draft of lambs from this mob in the previous week, with the tops taken out, the average lamb carcass weight from this mob was 21.1 kg. Fraser says the lambs are coming in pretty good now and are killing out at good weights. Weaning is set to occur in the last week of October. Once the ewes are weaned they will be grazed on “hard rations” in various sprayed out fallow paddocks around the farm. The ewes are effectively a dairy animal in late lactation and therefore need to be dried off in a similar way that dairy cows are: reducing feed quantity and removing them from their lactation trigger (in a dairy cow’s case you move them to the back of the farm away from the dairy shed to halt milk production, and with sheep it means isolation from all lambs). The ewes are large framed (a liveweight of 85 kg is not uncommon), but they really perform by usually rearing multiple lambs to finished/drafting weights prior to weaning. Fraser reports this as 75% this year, but this is behind the norm of getting lambs drafted before weaning. Another valuable trait of these girls is that they produce excellent quantities of milk, which is beneficial owing to their high fecundity, and ease of lambing. But when grazing any larger than average animal there is a cost to a pastoral system of their maintenance energy requirement consequently being higher – before animal production (meat and wool) demands are catered for. However, there is no doubt that the Avery’s have got brilliant animal grazing management skills to be able to feed these large ewes extremely well throughout the entire year. The results of which can be seen by the finished crop of lambs, and the condition of the ewes at weaning (the ewes have increased on average 4 kg of liveweight in the last month prior to weaning).

Below is a photo taken by Doug of a mob of freshly weaned ewe lambs on the 28th November, the average liveweight for this line was 38 kg. Doug admits there are many challenges to growing Lucerne, although despite this you get great lambs. The lambs below are well on their way to the target hogget mating weight of 50 kg. With a mating date of 1st of April they will need to put on a minimum of 115 g/head/day before they are put with the ram. Ewe lambs numbers are up this year, so there is a large pool in which to select replacements. Ewe replacements are usually selected pre-mating (with liveweight and body confirmation being the number one selection criteria) and again after lambing (depending on whether they have successfully reared a lamb to weaning).

The photos below are taken mid grazing, and then again at my visit (19th November). The pasture height was between 12 and 14 cm. The weed control from the late spray in October has been very effective with little weeds being present in the sward. This is essential in this paddock to maintain it’s certified status as a Torlesse seed crop. 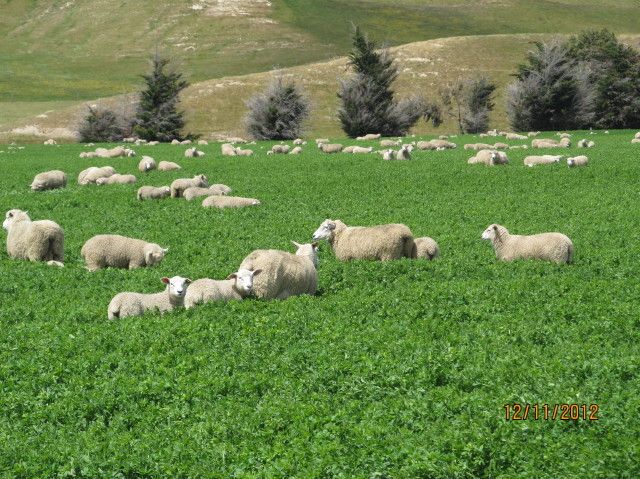