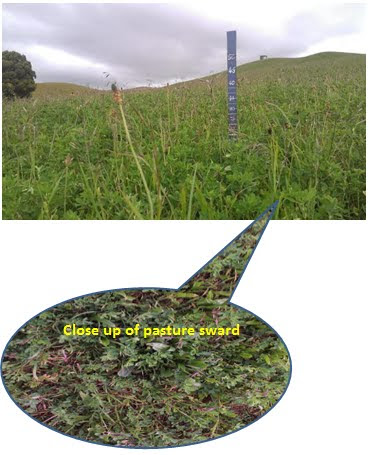 Glen Erin was being spelled from grazing at my last visit (19th November). The mob of cull ewes and their twin lambs that were being grazed here last time are being grazed elsewhere and were to return on the 20th November. The rotation length was 34 days for this round. You can see that in the photo below that the average pasture height was between 20-22 cm, and the plantain and prairie grass had started to set seed. Since this paddock was allowed to reseed in its first year, the paddock will be utilised fully in the grazing rotation. Weaning of all mobs was planned to occur at the end of November, and is a week later than usual owing to the slow spring.

To date there has been 1,600 lambs drafted with an average carcass weight of 19.6 kg. The bulls are also dressing out at some great weights this year (375kg), and have topped the record at Bonavaree for daily weight gain (2.2 kg/head/day of bulls grazed on Lucerne and Lucerne mixes). This growth rate is the average for the spring season. Fraser says the growth rates at the start of spring were undoubtedly compensatory weight gain as the cattle were moved from the hills to the finishing paddocks and given bloat boluses. But the weight gain achieved over the whole season is without a doubt a result of the excellent feed quality on offer.

This paddock is still performing well as Bonavaree starts to head further into the summer with inevitable soil moisture deficits. We will continue to monitor this paddock through the summer and report on it’s production and persisting quality once soil moisture is less than optimum. Notice the green tinge showing up in the paddock beyond Glen Erin house paddock…this is another Bonavaree mix paddock that was sown in October.

“Keep evaluating. Reassess different parts of your farm system according to the season.”

“Keep setting yourselves targets, whether that be: increasing pasture production, improving pasture species or growing animals bigger and faster.”