It’s been a slow spring at the Pyramid. Chris has said everything seems to be slow this year (both animals and pastures), and is a common comment for most farmers up here. The place was still looking green at my last visit (14th November), with most grass species only in the very early stages of flowering. Soil temperatures are below average for this time of year, with Chris’s soil thermometer struggling to reach 14°C at 8 am. Rainfall for Marlborough was below the normal spring amounts with only 35 mm of rain for November it was 55% of the long term spring average. September and October were also below average for spring rain at the Pyramid. A string of cool South Westerly fronts had also kept spring temperatures down this spring and were generally 0.5°C behind the average (it has been the coolest spring since 2000). Sunshine hours have been normal.

Chris had got two lamb drafts away when I had visited, and was due to wean everything the following week. The lamb carcass weights are coming in fine, despite the slow spring, with a singles draft average carcass weight of 21 kg dressed, and twins 18 kg dressed.

Doctors Bend and Back Gulley were showing little sign of Arrowleaf clover content in the pastures at this stage. Chris puts this down to the wet winter and cold spring (conditions in which Arrowleaf Clover will struggle to dominate over other species). Arrowleaf has one of the lowest tolerance levels of waterlogging of common pasture legumes available in NZ (see graph below). 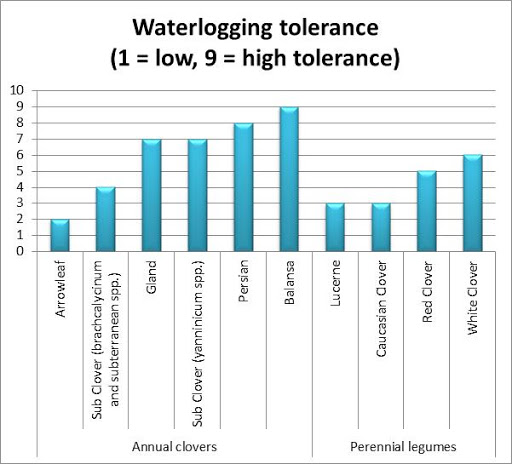 He is confident that the plants will come later on in the season, and will manage the pastures to increase the Arrowleaf component. The seedbank of Arrowleaf in these paddocks should be excellent as the pastures have both been allowed to reseed. Chris said the Arrowleaf Clover seems to break the majority of it’s hard seededness in approximately the 3rd year. Chris has managed these pastures to build up a soil seedbank of Arrowleaf in his pastures, and then encouraging seedling establishment by manipulating grazing pressure to reduce competition for autumn germination.

Back Gully pictured below had an average pasture height of 12 cm. Chris’s plans for this paddock was to leave it a couple more weeks and then come back in with weaned ewes, making sure that enough pasture is removed before mid-autumn to benefit Arrowleaf clover germination. The feed on offer here looked to be very good quality with minimal stalk and flower heads present. The dominant grass species here is cocksfoot and a combination of Mediterranean and Continental Fescue. Check out the second photo below of Paddy standing on the steep face Back Gully as seen in photo 1 below, this was taken in January 2012. There was a huge bank of high quality legume on offer, although this was then allowed to mature to seed set due to this block being the first year post sowing. 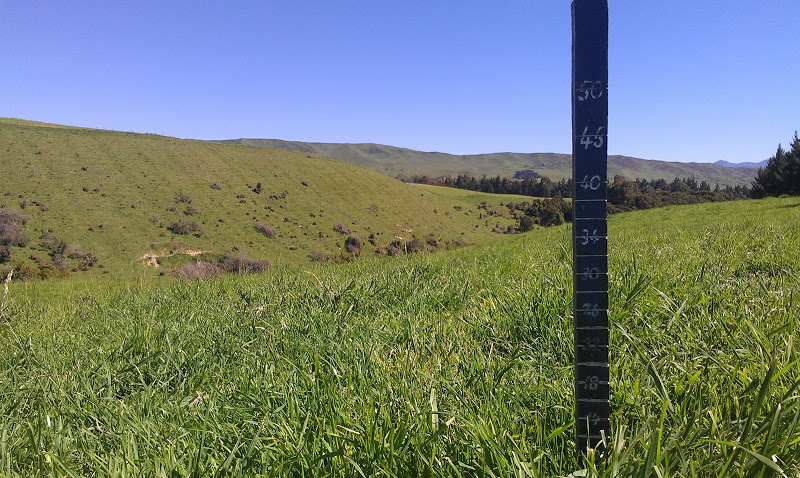 The pasture in Bottom Gully has had very good Arrowleaf content within the sward this spring. There was currently a mob of ewes and lambs grazing the paddock at my visit. Chris had taken photos of the pasture before the ewes went in (photos below). Note the dominance of the Arrowleaf coming through the canopy of the pasture sward. Because the Arrowleaf is a top flowering clover, the plant height can reach waist height in some years (see photo above of Back Gully Summer 2012 where the Arrowleaf was highly prolific and reached up to the waist). It is therefore very easy to overestimate the total drymatter of a top flowering legume within a mixed species pasture sward, because of the broad growth habit of the clover leaves, and the fact they extend to the top (canopy) of the sward. The pasture height pre-grazing was approximately 150mm and Chris will remove the mob at a height of 50mm at weaning, most of the legume will be preferentially grazed out by the sheep by that stage. The paddock may then be grazed with 115 carry over dairy cows to further remove the bulk of the vegetation (which will be mostly grass once the sheep have been removed). The paddock will then be shut up, with a view to letting the Arrowleaf set seed. Although all this depends on whether the Pyramid receives any rain. Chris’s policies for his Arrowleaf paddocks are to let the paddock set seed in it’s first year following sowing, and then approximately every 3rd year after that.

All activities post weaning are geared to open up the pasture to result in favourable conditions for seed germination in autumn, and allow flowering and seed set to replenish the Arrowleaf soil seedbank. And preweaning activities are focused on providing the best pasture quality possible for lactating ewes and their lambs.

The photos below are of Bottom gully during my first visit to the Pyramid (4th September). It was really get down on hands and knees stuff to find the Arrowleaf during early spring (Paddy, Chris and Julia’s son, is doing just that). You can see the amount of herbage that has been produced in this paddock in that time by comparing these photos with the ones above. The drill rows of the direct drilled Arrowleaf can also be clearly seen. 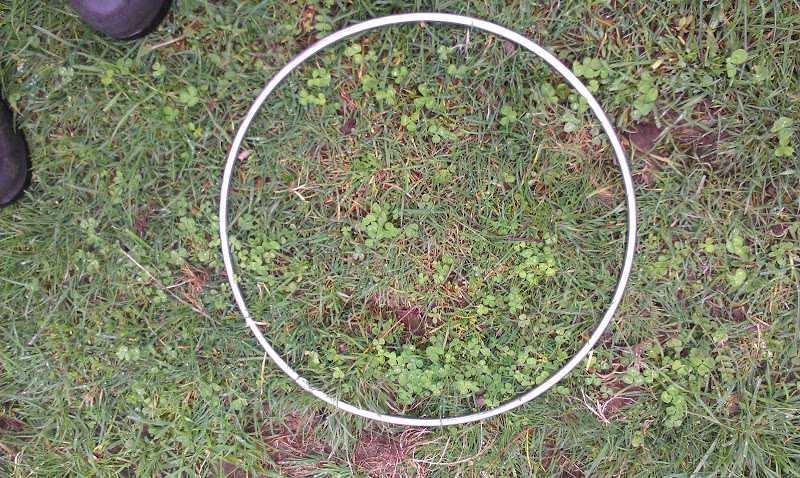 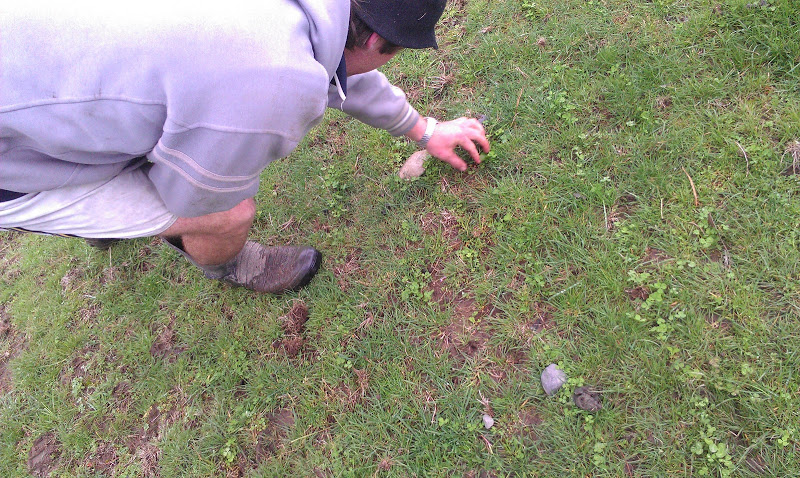 We will return to these paddocks in early to mid-summer to report on how these paddocks are progressing in relation to seed set and potential autumn germination of the Arrowleaf.