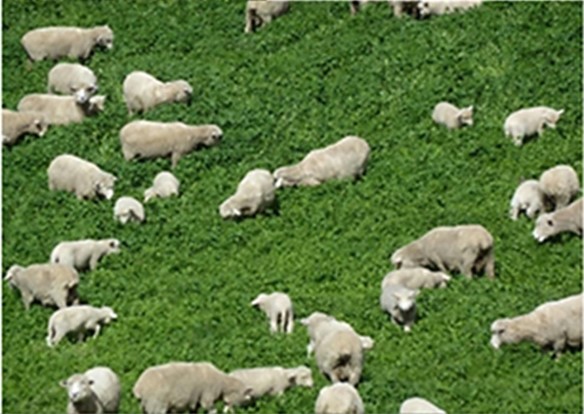 Warwick estimated that the carrying capacity of this paddock has been increased by 200%. By renovating the areas that were able to be drilled by tractor (approximately 12ha, 55% of the total paddock area), the quantity of pasture on offer within this block has been greatly improved. The increase in pasture quality is also a huge motivator for undertaking these sorts of pasture renovation projects.

Within this blog we will catch up with the renovation to date with a brief timeline of what occurred and when:

Warwick has had some great results with legume establishment by using alternate rows for his legumes to the grass and/or herb mixes. This allows the legumes which are slower to establish to do so without competition from the more vigorous initial growth of the grasses and herbs. The legumes are still able to provide nitrogen to the grass/herb vegetation, and establishment and persistence of the legumes appears to be improved when using alternate row species at drilling.

The renovated areas were drilled with the following seed mix and rates:

20 kg/ha of Persian Clover was also broadcast on using a spinner onto the wet gullies, and around springs.

The above mix was sown shallowly at 10-15 mm to benefit legume establishment. This was checked numerous times during drilling to ensure the seed was not sown too deep. Drilling depths greater than 15mm is the number one reason for poor establishment in legumes. Row spacing between coulters was 135 mm. The initial establishment of the legumes was slow owing to the weather conditions (wet and cold), and late sowing date (April 29th). A typical sowing date for this sort of paddock renovation would be February/March following a summer fallow, although this depends on rainfall. The winter in Marlborough was uncharacteristically wet and cloudy this year. You can see in the NIWA rainfall map (on left) that the north and east of the south island received higher than average winter rainfall for 2012. Warwick’s property is located in the area that received 1.6-2.0 times the normal winter rainfall.

Although once the sunshine hours increased in early to mid-spring the drilled areas really started to bolt and the overall establishment looked very good for all species. The photos (left) were taken on the 12 and 13th October just prior and during grazing. The average pasture sward height of the improved areas was between 40-48cm, and unimproved 15-20cm before grazing.

Photos below are of the Post grazing residue a couple of weeks later (1st November). The cattle had removed the bulk of the herbage, especially targeting the legume component and seed stem of the grasses. The paddock did have a remaining component of legume within the sward, albeit reduced from the preferential grazing of the cattle. We will assess the seed set of the legume in the following weeks. Pasture height was grazed down to an average of 16-18 cm. The plan for the future of this paddock is to leave it shut up so that the legumes are able to flower and set seed for the following autumn (although this plan may be effected by the weather outlook for Marlborough for this summer). NIWA is currently reporting Marlborough’s Climate outlook for November 2012 to January 2013 to be below average for rainfall (40% chance of below average) and available soil moisture (35% chance of below average) refer to the following link for NZ outlook maps: http://www.niwa.co.nz/climate/sco/seasonal-climate-outlook-november-2012-january-2013 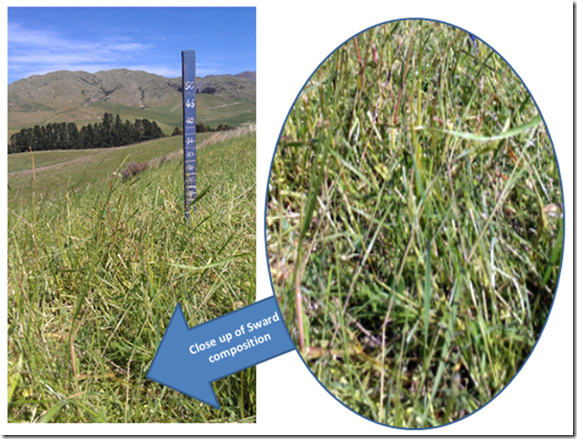 Warwick posed the question whether the annual clovers sown here will initiate flowering through to seed set this season giving the early onset of the dry. He predicts that the seeding rate will be low and late for this paddock. He also suggests that perhaps a tap rooted dryland plant is the best option in Marlborough as they are better able to access the subsoil water than sub, balansa or white clovers. Also having to shut up paddocks early (November) to initiate flowering in a dry year like this is a huge financial hit to take, as these paddocks are usually required to finish lambs. Other than Lucerne, possible options include: Russell Lupin, Arrowleaf, Red clover, Trifolium tumens, Caucasian, or a White Clover/Caucasian Clover hybrid.

Warwick’s farm plans, which may apply to other dryland farms relying on annual legumes during a dry late spring and early onset of dry condtions, are as follows:

We would be really interested in hearing what you have to say about this plan, what are you doing at your place? How have you managed this in the past?, etc. Please feel free to share your opinion and experience of what worked and what wasn’t so successful. It’s important we get an interchange of what is happening on-farm so we can all build a better understanding of the management of these novel legumes. You can use the comment function at the bottom of this blog, to comment, ask questions – we are happy to help!