DRY, DRY, DRY! Marlborough has entered its drought season well and truly, but this is the norm for Marlborough, and we have had some lenient moist summers for the last couple of years. It is in a year like this that the use of drought tolerant grasses, legumes and herbs really pays dividend. Warwick has well and truly given up on using ryegrass and white clover pasture mixes as there is no persistence to be had and therefore is a waste of time and money which is counterintuitive to an entire pasture renovation exercise. A paddock of permanent pasture which fails to persist past its first year has many costs involved with it: seed, herbicide, personnel time, tractor hours and fuel, possibly capital fertiliser and also the downtime for the paddock during establishment (this is the time from when you first spray it out and the first grazing), and then the costs involved in re-establishing it. So in a summer dry environment it is so important to select species which are:

The paddock renovation at Breach Oak has entered the regeneration process, most of the annual clovers that were used in the mix have re-flowered following the last grazing from cattle, and are full of seed. The clover species that look to now be most dominant of the legumes sown here are Persian, Balansa, and Arrowleaf (respectively). Sub clover was not visible due to it already having buried its burrs in the soil. The Arrowtas arrowleaf clover is still flowering at the moment and appeared to be pollinated exclusively by bumble bees (top 2 photos below), in contrast the Cefalu, an earlier maturing variety of Arrowleaf, had flowered and set seed (bottom right photo below).

The sown rows of the grass/herb mix were also visible (see photos below), and although they had not produced much growth since they were grazed in October, they were still green and looked to be able to survive the summer months. This is an amazing feat given the soil moisture deficits that are occurring in most parts of Marlborough at the moment. Soil temperatures were 16-18°C through December at 9am to a depth of 10 cm. Rainfall is about half of normal at Breach Oak , (23 mm over 30 days), while about normal of the long term average for other parts of Marlborough in December 2012. I have noted a particular increase in wind run this year compared to last, all of which contribute to increases in evapotranspiration and associated soil moisture depletion. You will also note in the photos below that the plantain is flowering and has set seed, none of the sown grass species appeared to be flowering at my visit. Although resident ryegrass had set seed and appeared to be dessicated and decaying. The plantain and grasses were drilled in alternate rows, 270 mm apart, with the clovers sown between.

The number of flowers and consequently the seed set of the annual clovers has been observed to be less than if the block received adequate late spring rainfall. However the production from this block has been phenomenal with both large increases in pasture quality and quantity on offer to Warwick’s high value stock (ewes in late lactation and young finishing cattle) in spring (refer to last blog for images of the pasture production and composition). As already discussed, with the early onset of dry experienced in late spring the reflowering of the block has been less than desired for seed set and possible regeneration of these annual species. However, when you observe the feed that was available and the observed increase in animal production the pasture renovation has been a valuable exercise to Warwick’s whole farm system. Warwick’s comments on his increased production from this block were “visible ewe and lamb performance was equal or better than other mobs stocked at 1/3 of this stocking rate”. Seed set would have been much greater had the block been fallowed in it’s first year to allow reseeding, however the feed was required in late spring for lactating ewes and young cattle, therefore the financial cost of NOT grazing the block would have been much higher. The seed set in the wet gullies, where Warwick spun the Persian clover seed, appear to be very good (see photos below), and would have been equivalent in the rest of the block if soil moisture had not been limiting.

Warwick plans to let the stock back in within the next few weeks and graze it bare, before the end of January. This depletes the competition from the resident vegetation come autumn when the annual clovers will start to germinate. It also aids the breaking of hard seed dormancy, as this can be dependent on temperature and light.

We will revisit this paddock in autumn to report on the germination and establishment of the annual legumes in this renovated block, as well as the production from the dryland grasses and plantain also used in the seed mix.

And just a reminder of what the paddock looked like in the middle of October: 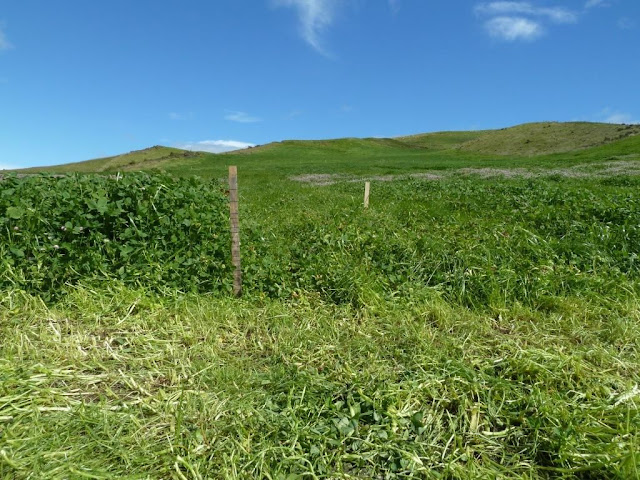 The potential is there to increase production on dryland hill country, and planning for autumn establishment should be starting now:

We will have more on autumn establishment in later blogs.