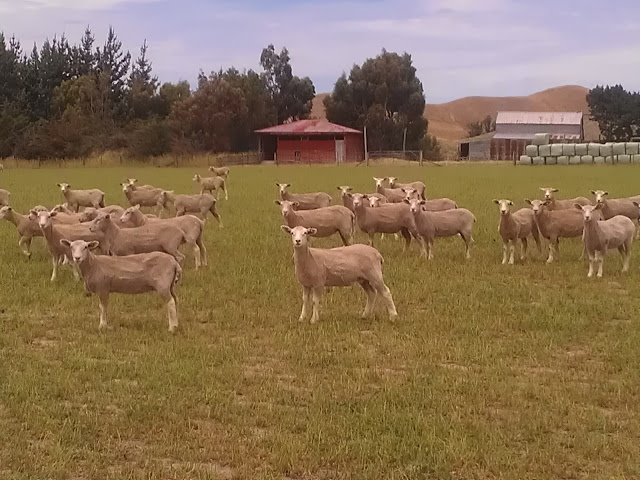 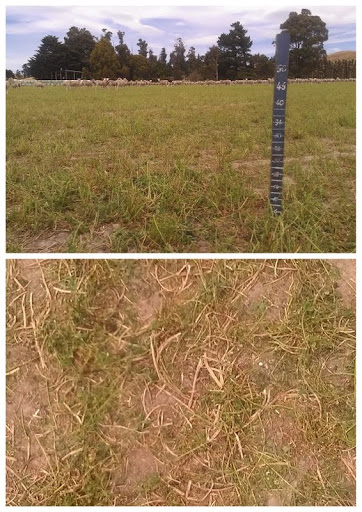 Jeffries Front Flat was being grazed by the replacement ewe lambs at my visit just prior to Xmas. The ewe lambs had removed the bulk of the leaf and green vegetation, leaving a small amount of stalk as residual (see photos at left of lamb residual). The mob of 950 ewe lambs were due to be moved out within minutes of me visiting, and had been in the paddock for approximately 3 days. The lambs had therefore received the most palatable and highest quality component of this paddock, and the following mature ewes were only being used to clean up the paddock in preparation for seed production. The lamb post grazing height was approximately 6-8cm.

Fraser and Doug are very satisfied with the condition of their ewe lambs post shearing, they are well on their way to a mating liveweight of a minimum of 50kg. Photos of this mob pre-shear can be seen in the November blog for this paddock. All remaining lambs at Bonavaree are shorn, this is an annual policy which suits the farm system. The lambs show improved liveweight gains when shorn post weaning due to the reduction in heat loading over summer. It also lessens the chance of grass seed damage to pelts and seed contamination of fleeces.

The plans for this paddock from now on are all geared to maximise seed production (certified Torlesse). The paddock will be shut up once the ewes have cleaned up the stalk. Harvest is being scheduled for late March/April (depending on the season).

The next door paddock is also used for certified Torlesse production. The paddock had been cut for baleage, and was due to be baled the same day of my visit. Supplements from the Lucerne paddocks are only made if there is an excess AFTER the animal feed needs are met. At Bonavaree the animals always come first, so cut and carry comes second. If necessary supplements are purchased, although this year 265 bales of Lucerne baleage were made. 150 bales of Lucerne baleage also remain from the December 2011 harvest (the bales seen in the photo above are all from 2011). This was a record breaking year for baleage production at Bonavaree due to the higher than average summer rainfall. One tip Doug and Fraser would like to share when keeping baleage for more than one year is to not stack the bales (in this case 10 bale equivalent medium squares) more than 2 rows high. A small number of the bale parks were stacked 3 high, and some of the bales on the bottom row had to be dumped. Doug thinks this was due to the plastic of the bale wrap degrading from the weight of the bales above.