Watch this space….the Block at Tempello (Bottom Tomlinsons) is due for a major re-vamp. The Griggs have made plans to subdivide the block within the next few months. This will mean that the block, that is now approximately 40ha, will be fenced into 3 x 13ha paddocks. The main reason for doing so is to be able to more effectively manage the grazing of the block. With the number one benefit being an improvement of the pasture quality on offer. This is achieved by controlling pasture cover using grazing and in doing so the Griggs can impact the pasture composition (dead, leaf and stem ratios) and also influence the pasture sward species (grass vs clovers). The main aim at Tempello is to increase the clover component of the sward by controlling grass competition at key times of the year (usually late spring through to late summer, and sometimes in winter). In previous years the subdivision was achieved using temporary dissecting electric fences. This was no mean feat given the steep topography of some of the block. But the benefits in breaking this block into smaller areas (that could be more effectively grazed and utilised) meant that the resulting pasture quality and animal production, was well worth the effort

Bottom Tomlinsons was due to be shut up over late spring to allow the sub clover to flower and reseed the soil seedbank, although the block was required for cows and their calves. As well as this, the extreme dry over November and December have greatly reduced the flowering potential of the sub clover in this block. Woogenellup (the main sub clover species in this block) has a peak flowering period in early November, but the plants were dry and crispy by mid November. November and December have been below average for rainfall at Tempello with just 4mm in November and 15mm in December. A large proportion of this block is North facing, and therefore is prone to soil moisture deficits with below average rainfall.

The moisture situation then changed rapidly in January with the following regular rainfall events of 15.5mm on the 2nd, 9.7mm on the 10th, 46.3mm on the 14th and then 13.3mm on the 15th January. These regular rainfalls, whilst needed during summer, also bring with them their own issues and problems for annual pasture species. Subterranean clover survives the summer as a buried seed when the plant buried it’s burr into the soil at seed set. The seed then germinates after rainfall, if a subsequent dry spell occurs then some of the newly germinated seedlings will die, and is termed a False strike. The ability for the sub clover component of the pasture to persist in the pasture sward, and buffer the effects of false strikes, is dependent on the amount of resident hard seed in the soil seedbank. Various species have a higher hardseed % than others, cultivar variation also occurs within a species.

See below for photos of the Bottom Tomlinsons transect taken on 30th January 2013. You will notice the fresh set of sub clover seedlings that have germinated already (germination was initiated from the regular rain earlier in the month). The seedlings are at various stages of development, i.e. cotyledons leaves, spade leaf, and 1-2 trifoliate leaves. The survival of these seedlings will depend on further rain and replenishment of soil moisture, as well as their stage of development. With the older more developed seedlings having more chance of survival due to more developed root systems compared to the newly struck seedlings (plants with only cotyledon or spade leaves emerged).

This year’s pattern of dry following late summer rainfall also occurred in the summer of 2011. During this summer Jo Grigg followed 3 individual plots in Bottom Tomlinsons and tracked the survival of sub clover seedlings from late January through to the end of March. Each plot varied as to the amount of resident pasture cover with the following differences: plot 1 Crowded with grass (30cm high and dense), plot 2 Medium grass cover (20cm high), and plot 3 Open area (couple of grass plants at 10cm, but relatively open). The following monthly rainfall events occurred (which at this stage is very similar to this year’s rain): 40mm January, 12mm February, 16mm March and 9mm to 5th April.

The following photos show the 3 plots throughout the 3 months of monitoring of sub clover seedling number, and approximate age of seedling:

The Management of the block, over the monitoring period, consisted of 19 days of grazing with 200 cows and calves from 21st February to 12th March. Pre-grazing average pasture mass was 2800-3000kg DM/ha, and residual post grazing pasture mass was approximately 1500-2000kg DM/ha. The target post grazing residual was lower, at around 1200-1500kg DM/ha, but the mob of cattle were pulled out earlier than planned due to ryegrass staggers. The pasture species at this time of year was a mix of browntop, sweet vernal, and ryegrass.

The findings from this mini-trial were interesting and have helped Jo and David understand the relationship between pasture cover and seedling survival of sub. The results have also assisted their decision making process of grazing management over summer to aid autumn sub clover germination and seedling survival.

The main points that the Griggs concluded from their observations of the 3 plots over summer 2011 are as follows:

Photos below of this year’s crop of lambs taken November 2012 at 12 weeks and freshly weaned off ewes grazed on dryland hill country. 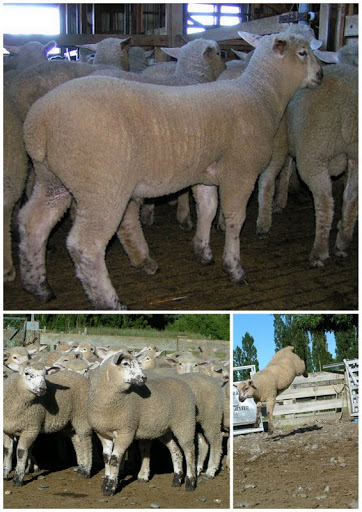