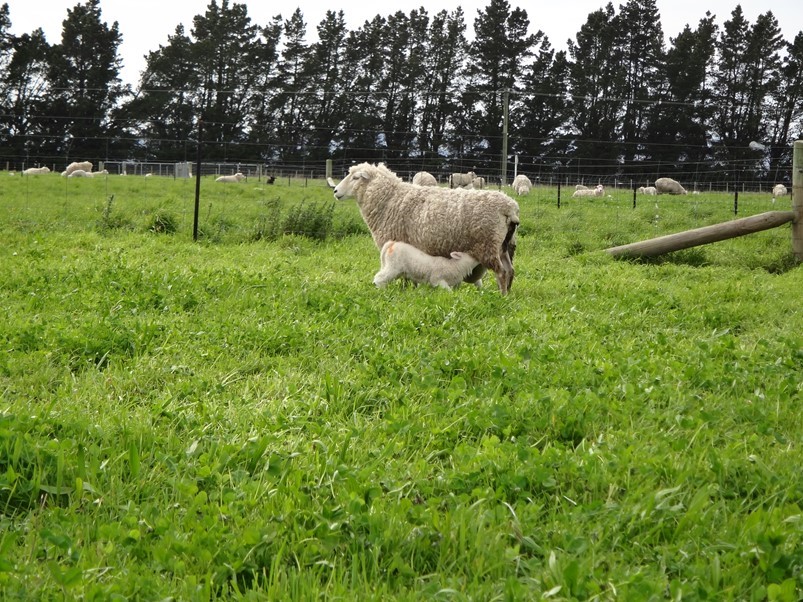 Earlier this year, Prof. Derrick Moot discussed ‘Planning for sub clover dominant spring pastures in autumn’(1) so that farmers would have high quality feed for their lactating ewes.
There’s a good reason for the focus on sub clover as the legume of choice for pastures in summer dry areas. Results from the Beef + Lamb New Zealand-funded ‘MaxClover’ grazing experiment, carried out by the DPR Team at Lincoln University, showed that superior clover content in sub clover/cocksfoot pastures gave greater liveweight gain per hectare from August to October than white clover/ryegrass or white clover/cocksfoot pastures(2). Sub clover provides cost-effective high quality dry matter and fixes atmospheric nitrogen in root nodules in the soil.
A quick note about the weather. In contrast to 2016, the 2017 autumn and winter seasons have promoted sub clover establishment and growth. In many east coast dryland areas rainfalls >20 mm in March allowed sub clover to establish earlier than in recent dry autumn years. The subsequent autumn and winter rains were, in many places, more than enough to enable the early sub clover to get off to a ‘flying start’.
So here is the promised follow-up on how to maximise the use and longevity of these sub clover-rich pastures. The following discussion considers three sub clover management scenarios:
1. the new sub clover pasture that was drilled in autumn this year,
2. the established sub clover pasture requiring more sub clover, and
3. paddocks with high sub clover cover.
For all scenarios the key to sub clover persistence in permanent pastures is careful grazing management.

For those farmers who drilled or oversowed sub clover seed into their pastures last autumn, the sub clover will have provided valuable feed through the late winter and into the spring (Figure 1). Grazing management during the first spring of newly established sub clover should be lax (i.e. about 2000 kg DM/ha) using lower stocking rates than usual until two or three weeks after the start of flowering. (See the section on ‘Sub clover flowering time’ at the end of this blog).

Once flowering starts, sub clover stems elongate (Figure 2). Later in spring sub clover runners can grow a further 20 to 30 cm in length. This means that individual plants have the potential to reach at least 60 cm in diameter and colonise vacant space. Each sub clover plant will have about five runners with about six burrs, each containing 3 or 4 large seeds, per runner. So each spelled plant can produce over 100 seeds! These become part of the sub clover seed bank in the soil that can germinate (mainly in autumn) over a number of years depending on seed hardness (3) and environmental conditions. 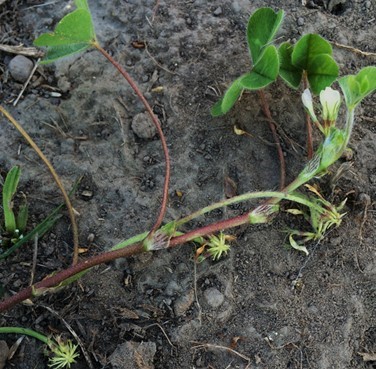 The new paddock should be closed to reseed two to three weeks after the flowers become obvious which is most likely to be seen around early to mid-October. This is essential to ensure that there is a sub clover seed bank in the soil for succeeding seasons. Over a ton of seed can be produced from a sub clover dominant pasture when spelled from grazing after the start of flowering.

How long to spell?

A spelling period of 4 to 5 weeks should ensure that the sub clover has produced a high number of buried burrs. These can be observed in the field by looking at the runners and seeing how many burrs are present and how many are already ‘pegged’ in the soil. Note that sub clover cultivars vary in their ability to bury burrs and burr burial is affected by environment (e.g. soil dryness) and management practices (e.g. grazing). See Carmen’s blog for more about burr burial and seed dispersal(4).
Longer spelling from grazing will result in more seed in a moist late spring but this may result in a lot of grass seed heads. Removing sheep from pastures shut-up to set seed is vital because they target the sub clover runners. Cattle grazing stocked to keep about 1800 kg DM/ha through flowering will allow more seed set than sheep.

For established pastures special grazing treatment, such as lower stocking rates and/or spelling, only applies to target paddocks where the aim is to increase sub clover content. Sub clover based pastures can develop clover dominant patches with >2000 plants/m2. The distance between the patches is important. The best time to assess this is in September/October by walking across your paddocks. If you step on a sub clover plant/patch every second step, about every 2 metres, then that is acceptable. If the patches are a bit more than 2 metres apart on average then it will take a long time for patches to join up and provide a sub clover dominant pasture therefore it’s time to spell. Given the opportunity, the sub clover runners will extend the patch up to 60 cm in diameter in a season with spelling.
Again, to increase sub clover content the paddock should be closed about two to three weeks after the sub clover flowers become obvious. Having found that the sub clover is flowering, do not be tempted to take a last few days grazing to ‘clean up the green leaf’ before spelling the paddock as this will result in runners being eaten and seed yield being greatly reduced.
In situations where there are large areas with little or no sub then reseeding and a six to eight week spell in spring to allow runners to invade grass dominated or bare ground areas will be needed. These paddocks are best identified in September for reseeding next autumn.
Over time reseeding with sub clover in autumn, by direct drilling or oversowing, may be considered for paddocks with less than 20% sub clover. As a guide, for a farm with 50 paddocks of sub clover pasture aim to reseed the 2 or 3 ‘worst’ paddocks each year. Done properly, reseeding may only be needed every 10 to 15 years.

Could paddocks be spelled for longer?

If the summer season is providing sufficient rain for continued plant growth, as it was in some areas last summer, and the feed on the drier north-facing slopes is not required then consider shutting some paddocks up for longer. This is the type of season when annuals, both good and bad, will set a lot of seed no matter what grazing strategy is adopted. However it may be best for farmers to select a few paddocks to spell through to late December to get maximum clover seed set because lightly grazing all paddocks will result in selective grazing of the legumes in late November / early December. Thus legume seed production will be reduced in all paddocks and grasses will set relatively more seed that legumes. Also note that grazing cattle are less selective and more likely to give the sub clover a chance to ‘run’.
Remember, though, that pasture tag will need to be grazed off completely and the pasture opened up for the successful re-establishment of the sub clover the following autumn.

3 Spring grazing of the majority of dryland paddocks

With normal stocking rates the pasture can be grazed down to 1200 kg DM/ha. On average this will leave the sub clover with one leaf. Lighter grazing will encourage the spread of the sub clover through runner development (Figure 3).
If the pasture is grazed down to less than 1000 kg DM/ha by sheep then selective grazing of the sub clover plant will result in no leaves left. By the end of the season the plant may recover enough to leave a couple of burrs close to the plant but there will be reduced seed numbers and the seeds may be less than half normal size. This will not increase the sub clover content next year.
It is important to check for the ‘danger signs’ of over grazing and the inevitable results of selective grazing of the sub clover. Figure 3 Some sub clover plants have been closely grazed by lactating ewes but there is still plenty of leaf left. This hill country pasture at ‘Koromiko’ in North Canterbury has a light stocking rate of ewes and lambs (2 twin bearing ewes/ha) and will be spelled in mid-October to encourage reseeding. Photo Sonya Olykan (7/9/2017). Note – the sub clover population (about 200 plants/m2) is the result of aerial oversowing in the autumn of 2016.

Lenient spring grazing may be required every five or so years for established sub clover pastures as it is important to regularly replenish the seed bank. Light grazing to 1500-2000 kg DM/ha during October also encourages seed production.
Keep a record of when paddocks are differentially grazed and of their September clover cover ratings, to guide you in sub clover management.

Knowing when to shut the paddock gate and start the spelling period is linked to sub clover flowering times. You’ll need to take a walk across your sub clover paddocks from mid to late September through to October depending on sub clover cultivars in the pastures.
Sub clover flowers are small – about 10 mm long and 3-4 mm wide – so you will have to look closely at the sub clover runners to see them (Figure 4). The first flowers on the runners will be close to the centre of the rosette (Figure 5). These are self-fertile so no bees are needed to set more seed!

Figure 4 Sub clover flowers are small: the photos of ‘Antas’ (left) and ‘Narrikup’ (right) are not to scale. Some sub clover cultivars, like ‘Narrikup’, have red-banded flowers which helps with cultivar identification in the spring. Photos: Dave Hollander. 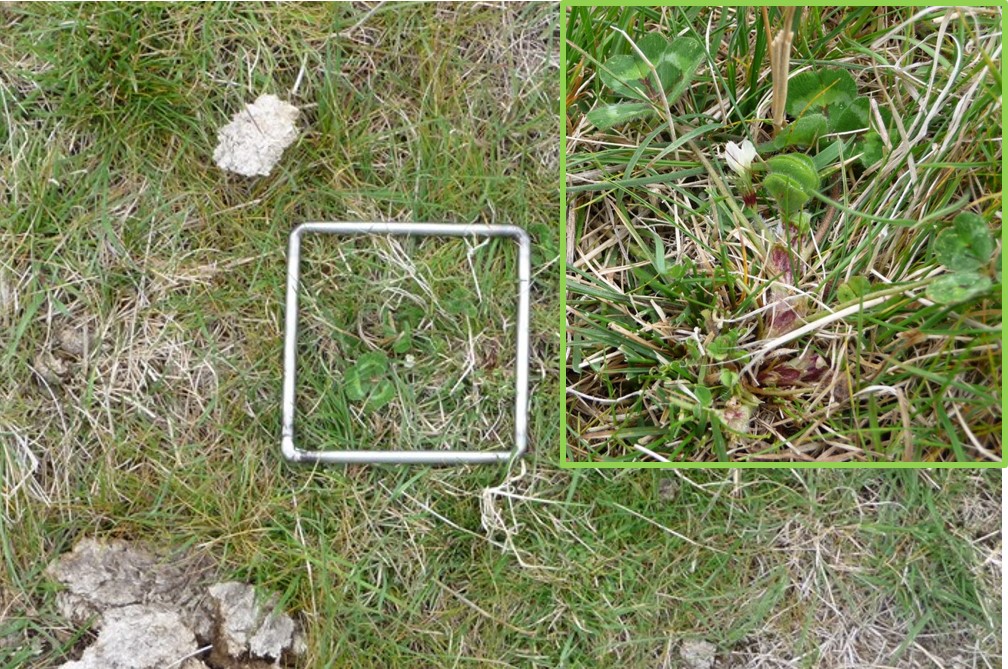 Based on Carmen’s data and other sub clover experiments the following provides an indicative time for when flowers may be first observed in lower altitude Canterbury (older resident sub clover cultivars are reported in brackets) based on the cultivar mixes suggested by Derrick(1) which considered the hardseededness ratings of the cultivars as well as flowering dates:

See Carmen’s blog(5) for more details about the flowering stage of sub clover and the factors that affect flowering time.
It is recommended that sub clover be sown as a mixture of cultivars with complementary characteristics (e.g. flowering time and hardseededness) so that variations in climate, topography and soil depth within a paddock are covered. Persistence of cultivars over time will indicate which ones are best adapted for future sowing(6).
While some cultivars may be flowering quite early, the sub clover/pasture feed is needed for lactating ewes so the rule of thumb is to look out for sub clover flowers from mid-September, which is now!

LOOKING AHEAD TO SUB CLOVER IN 2018