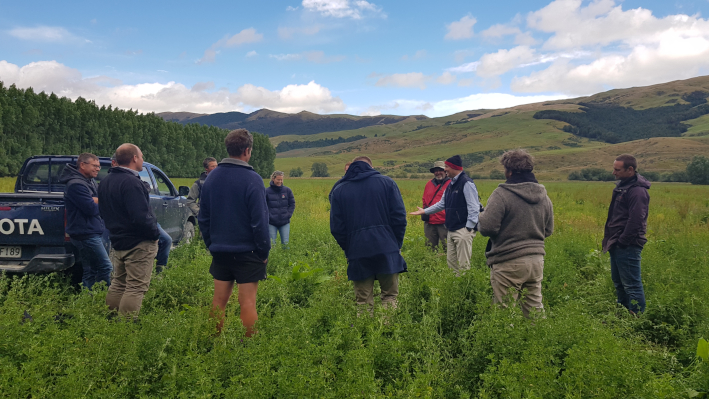 Professor Moot recently took the opportunity to show his overseas visitors some of the farming practices in New Zealand. The visit to a Northern Southland hill country farm discussed the importance of lime for clover production on hill country. The cost of flying on lime can appear prohibitive as the clover response may take 2-3 years to show after 1-2 t/ha has been flown on. The option of testing a small area for a molybdenum response was also discussed in an area with high clover content but small leaves.

The second stop at recently flooded but strongly recovering lucerne stand highlighted the value of plant even in this wet (900 -1300 mm rainfall) environment. Four cuts have routinely been taken over the last 5 years producing 14-16 t/ha/yr. This is definitely comparable to the N deficient perennial ryegrass that grows in the adjacent paddocks.

A second farm visit in the district discussed the use of lucerne and sub clover on the flats and lime on hills as part of a development that had increased meat production from 30-40 kg/ha to close to 200 kg/ha. The addition of two pivots has aided this but they are a small part of a large station. The major change is the focus on high quality legume based pastures in all areas of the farm. Dairy bulls provide trading stock that can be kept or sold as the pasture growth responds to unreliable rainfall on the majority of the farm!

Traveling back through the McKenzie district the emphasis switched to the use of lucerne on fans at the bottom of hills to provide high quality lactation feed to merinos that had lambed on the adjacent hill blocks. Where low pH high aluminium soils prevent the use of lucerne, perennial lupins have been providing the legume and shelter during lambing – allowing a more than doubling of stocking rate on a previously area of low productivity.

Their final stop was a visit to a bull beef unit grazing predominantly lucerne. The lucerne is planted on north facing hill blocks and recent rain had sprung it into life while the grass had responded by throwing seed heads. This season started dry so feed had been short until December rain provided the high quality lucerne. Last year a dry spell in summer followed by rain had meant the farmer lost some bulls from nitrate poisoning (when rain came after a prolonged period of dry – so nitrate is drawn in the soil water to the short lucerne but dull overcast conditions dry prevent it being converted to protein) but this year there have been no losses to date.  Prof Moot commented that knowing what the problem was allows management techniques to be developed to reduce the risk and applauded the manager for continuing with the grazing to reap the rewards this year. He also suggested weed wiping the Californian thistles in one paddock in the next month would be a good idea. At this time of year the thistles are starting to take sugar down into their roots and rhizomes so a chemical like glyphosate can attach to those sugars and kill the underground parts of the plant- which is the only way to stop it coming back.