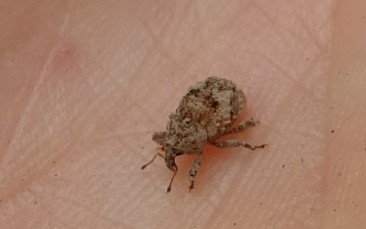 This Christmas message is not the one you would like to read nor the one I was hoping to write. Nevertheless, it is the one I have and the facts cannot be ignored.

We have not found any larvae of the plume moth at the sites we considered established. We visited two North Canterbury sites fortnightly from mid-September, and never saw any sign of foliage damage like we saw in the two previous years. Similarly, a visit to the site in Marlborough hasn’t yielded any signs. No eggs, no larvae, no pupae, no adults, no defoliation. We visited most other release sites since, and could not find the moth or signs of fresh feeding.

We are starting to think the consecutive years of La Niña have been a bit too wet for the moth. We may go for another site visit in January, but not holding our breath.

Should we try introducing the plume moth a second time?

Our thinking is that yes, we should re-introduce the plume moth from Australia in September/October 2023. We would need to do something a little bit different this time round to try to get a better result. One option is to try a different release method. We originally followed the release method that worked extremely well in Australia. But perhaps the NZ oceanic conditions call for another strategy, for example, releasing a different life stage of the moth, and perhaps larger numbers at each release site. If we put the current project on ice for now, we should have close to enough remaining funding to reintroduce the moth in September-October 2023 and release in the summer of 2023/24. If we do that, we should select a range of new sites for releases and leave the original release sites alone. This will enable us to keep following up on these sites, to see in a few years’ time if the moths from the original releases have actually survived in small numbers and needed time to recover.

The clearwing moth is hanging in there, just

A recent visit to the Mackenzie site tells us that there are still larvae surviving inside the roots and getting fat. They are still at low abundance compared to the larvae of the beetle that also populates the roots. It is a great sign that the larvae have continued to feed through another season and haven’t perished. They are, however, still a bit behind for this time of year. They are still head facing down, i.e. actively feeding, whereas they should have been head facing up in preparation to pupate, or even be pupae by now. Will they make it to adulthood this season??? The plans at the site look healthier than in the previous two years, which could be because of the high rainfall – allowing plants to overcome the stress from the root-boring insects. We have dug up some plants which are now in pots, inside cages, in hope to have adult moths as well adult beetles for identification.

We have also set up two data logger stations at the site, to record soil and air temperatures. We will compare the data to what has been modelled as required for the clearwing moth from studies in its home range, prior to introducing the moth to Australia.

The North Canterbury site tells a slightly different version of the same story. We found an abundance of old signs of moth presence – old frass (insect poo), empty pupal cases, but no live larvae or pupae. Are these all signs from the original release? From the season following the release? We can’t tell. But it doesn’t look like there is any survival of the moth at that site. There are still plenty of the weevil larvae. A few pupae as well, although not as many have pupated as this time last year. Fortunately, we found 4 adult weevils, which we believe are the ones whose larvae are in the roots. We have sent them to the experts for morphological identification and have just found out that they belong to a genus that is endemic to New Zealand (only found here), and they do not match any species available in the NZ collection. We need to compare them to a few specimens deposited in overseas collections to confirm whether they are a known species or completely new to science. The known species in this genus are very restricted in their distributions, so this one too is unlikely to be widespread, and not something we could consider as a biocontrol agent in its own right. We plan to follow up the morphological ID with molecular confirmation to ensure these adults are the same species as the larvae we find inside the roots. The weevils do seem to occupy roots which have tunnels of the clearwing moth, producing parallel tunnels. We don’t know yet if they require the moth to weaken the plant before they can populate it. Very little is known about the life history of species in this genus. Adults of some species have been collected from leaf litter and in association with decaying timber. We are keeping some potted plants from the North Canterbury site in cages too, for further emergence of weevils.

In this site too, the plants look healthier than in the previous two years. However, there are still signs of stress: while some plants are flowering, others are smaller and not flowering, and their old stems from last year show that they were much bigger in their previous growing season.

Where to from here for the clearwing moth?

We will continue to work on identification of the weevil from North Canterbury and the beetle from Mackenzie. We will continue to keep an eye on whether the clearwing moth continues to survive at the Mackenzie site. If we get any adult moths emerging from the caged plants, we will hopefully get enough of them, so they can mate. We would then collect their eggs and, depending on the numbers we get we will assess the best use – either strengthening the existing population, or try to establish a new population in a different site.

Best wishes for the holidays. We hope you get a break and time to spend with family and loved ones.

You can find previous updates by checking the Horehound BioControl page here.