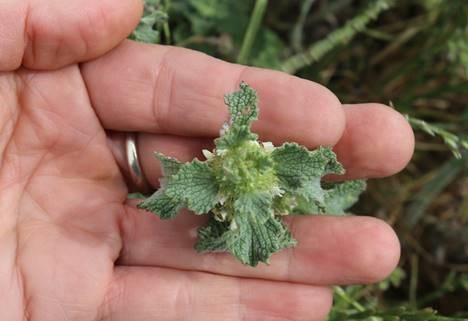 Funded by the Sustainable Farming Fund.

The content provided on this page has been supplied by the Horehound Biocontrol Group and Dr Ronny Groenteman (Senior Researcher – Weed Biocontrol, Manaaki Whenua – Landcare Research). Content will be updated as the project progresses.

Horehound (Marrubium vulgare) is a naturalized, perennial, drought tolerant herb which is widespread in low rainfall areas of New Zealand, particularly in the South Island high country. This species is also emerging as an important, and difficult to control, weed in stands of our most important dryland pasture species – Lucerne. There are currently over 150 000 ha of lucerne (alfalfa; Medicago sativa) grown in New Zealand.

The main issues with the invasion and spread of horehound within pasture systems is the species is unpalatable to grazing livestock and can, over time, displace agronomically important pasture components. This reduces the quantity and quality of feed on offer. In cases where animals are forced to eat horehound, meat is tainted. Additionally, seeds can downgrade wool quality of animals which have grazed in paddocks infested with horehound. To date, chemical and mechanical control has had limited success in controlling the spread of horehound. It is currently estimated that the economic impact to farmers is $29-$39M annually.

The Group was successful at securing funding to pursue the introduction of the biocontrol agents that have become successful in Australia. The application to release two species of moths for the biological control of horehound was granted approval by New Zealands Environmental Protection Authority in September 2018. Check out the Blog for a series of posts which describe the journey to approval of the biocontrol agents.

^ Back to Research Projects ^

^ Back to Research Projects ^