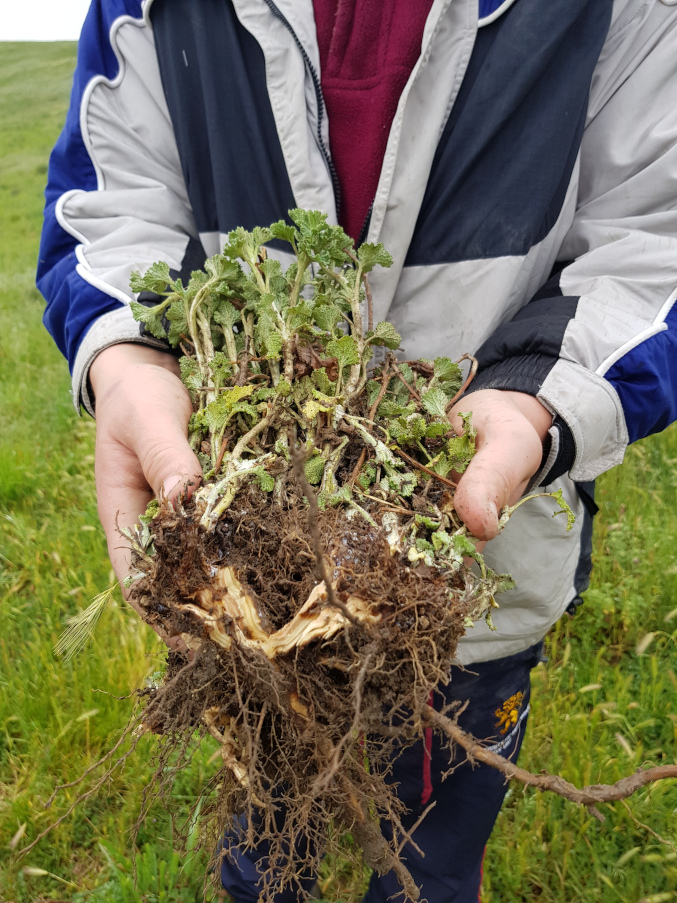 November has been a busy month on the horehound biocontrol front, and it ain’t over just yet!

Earlier in the month we were lucky to host horehound biocontrol expert John Weiss from Australia. John joined us to present at a field day as part of the NZ Grasslands Association annual conference, in front of nearly 400 attendees. The conference was held in the centre of horehound stronghold, in Mackenzie country, and the message about imminent biocontrol for horehound was taken with great anticipation.

In the days following the conference we took John on a tour to visit horehound-affected farms, to decide about optimal sites for making the initial releases of biocontrol agents. When we first take the biocontrol agents out of containment their numbers are limited, and it is crucial to do our best to optimise their likelihood of establishment. Later on, once they are established in a few initial sites, it is easier to harvest and redistribute to new sites, even if the new sites are less than optimal. The insects may well establish if we have larger numbers or try multiple times in the less optimal sites, but we just don’t have this luxury for the very first releases.

John was overwhelmed by how lush horehound looks in New Zealand. He assures us that the plume moth will manage to establish pretty much everywhere here, but warns that we do need to take a deep breath, because it will take a while for the moth to have an impact on such healthy plants and massive seedbanks. As for the clearwing moth – John anticipates that some NZ horehound areas will struggle to support populations of this warmth-loving insect, but it will still be worth trying to establish populations even in cooler climates – once we have it well established at warmer sites.

We farewelled John on a Sunday afternoon, only to meet him again the following Friday morning, this time in his home ground, in Melbourne. Another 5 hours’ drive, and we reached Wyperfeld National Park, where the clearwing moths were released in the late 1990s. The site has not been visited since 2006, and we were all hopeful that horehound has not been completely eliminated… Indeed, horehound is still there since, even with almost every plant being attacked by the clearwing moth, the seedbank is just vast. The plants are more sparse than they used to be, but there is a long way to go. Well, we need to start somewhere, and at least stop the spread of horehound into new pastures!

On this trip we were also joined by Jean-Louis Sagliocco, who did extensive research on the clearwing moth in Europe in the 1990s, in preparation for its introduction to Australia. Jean-Louis was so generous with his knowledge and experience, which will be crucial for getting the clearwing moth to thrive under artificial conditions in containment. This is no small feat, because this creature takes very specific environmental cues to trigger mating and it is tricky to replicate optimal conditions in an artificial environment.

We were also lucky to have with us this year’s student intern from Birmingham University, Ollie. It just so happens that Ollie is a rugby player, with the perfect build for a job digging horehound roots. I think Ollie enjoyed the trip despite the hard work…
More about Ollie and his horehound work in a future update.

So, now we have a few hundred horehound roots with larvae and pupae of clearwing moths inside, and we are waiting for the adults to emerge over the coming weeks. Several adults have already emerged, and mating has been observed, phew! We must have got the conditions right – thanks to Jean-Louis! The strategy for releasing this agent from containment is in the egg stage, and we need at least 800 eggs to make a viable release. These eggs should start to become available very soon! Releasing as eggs will be a tricky part as well, but more about the why and the how in the next update…

All the best,
Ronny & Gavin