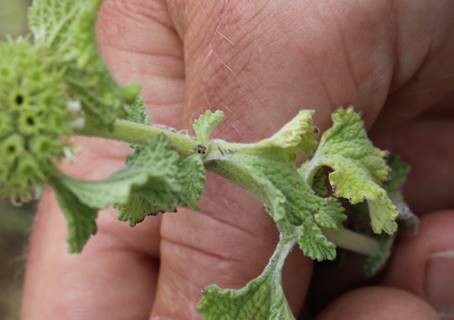 It has been just over a year now since we first released the horehound moths, so it must be a good time to assess where they are at.

Plume moth – no big news yet

This one was supposed to be the easy one, remember?…
We released caterpillars of this leaf-feeding moth at eight sites. So far we have visited six of these sites, and could only find barely-detectable evidence of moth activity or presence. Why can’t we find it if this was supposed to be that easy??? Our trusted guide from Australia, John, was in NZ in January and visited three sites with us, and he too is perplexed. The horehound is in good enough condition for the moth – much better than plant condition in Australia this time of year.

It is quite possible that we are searching too soon. John says that when releases were first made in Australia, they did not go back to check release sites for 2-3 years.
We see evidence for very low abundance of the plume moth, so it is hanging in there, which is still very good. We might just have to be a bit patient before we can start thinking about redistribution.
Nevertheless, it was great to have John here to confirm that i) we have been searching correctly and, ii) it is not in our imagination that we are not finding much. We are now also a lot more confident that we know what subtle signs we are looking for to confirm plume moth presence.

What’s next for the plume moth?

For now, we will give it more time and keep coming back to the release sites to look for signs of population build up.
Owners of release sites: please continue to keep grazing animals out of the release site during winter. We don’t want those growing tips with tiny caterpillars becoming a protein meal for enthusiastic livestock.

North Canterbury sites where the clearwing moth was released have reported in December that plants at the release sites are looking unusually miserable. Now that’s the kind of reporting we like to hear! At one of these sites we can even report that larvae were found in the root-crowns of a couple of those miserable-looking plants.
Even better yet – at a visit in January to our very first release site we saw a good number of seriously dead plants. The label indicating they received a moth egg was still hanging around. What a delightful sight this was!

At sites where plants were really strong to begin with – we saw plants have weakened by moth attack, but it was not enough to kill plants. Such plants probably require multiple attacks.
All this evidence is telling us that the first (and crucial) hurdle in establishing this moth has been crossed successfully: the little eggs we glued onto toothpicks hatched, and the larvae made it into the root-crown. Now it is time to cross fingers that the second hurdle will also be crossed successfully: that we will had enough hot days in a row when the adult moths emerged (from around mid-December until about now) to satisfy their conditions for mating.

What’s next for the clearwing moth?

It will be another year, possibly two, before we can determine if early establishment has been achieved. We are quietly optimistic that the clearwing moth can be a real star here, so it is worth waiting patiently.
Owners of release sites: please keep grazing animals out of release sites for another 2-3 weeks. This will give eggs a chance to hatch and for larvae to crawl down to the root crown, where they are safe.

How can I get these moths for my property? You probably ask…

Too early yet. We still cannot confirm establishment, let alone sufficient numbers for re-distribution.
It takes long, deep breath to be in the business of biocontrol. Hang in there! It’s looking promising!

We’d like to acknowledge Environment Canterbury for providing funding to revisit release sites to check for agent establishment.