Here are some photos of sub clover taken by Doug Avery on ‘Bonavaree’ Farm in Marlborough.

The photo below shows Fraser Avery standing in high quality legume dominant pasture last spring (1 October 2016). This is ‘Antas’ sub clover which has been allowed to set seed in its first year and is now ready for grazing in its second year. 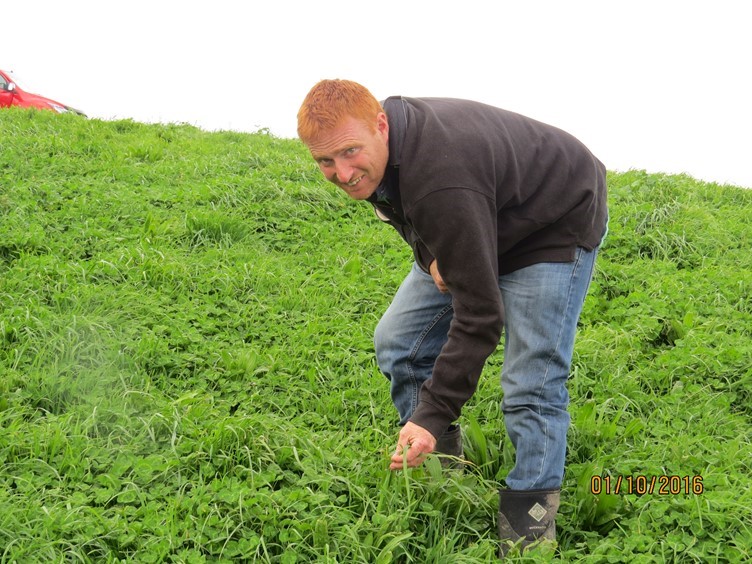 The aim is to provide feed from late autumn to early summer and then rest the pasture. The Averys mainly graze cattle and have let the pasture seed for several years to create a seedbank. They have found that all the original pasture components have added to the mix. While the ‘Perun’ has thinned out with drought, it is only a medium term grass and has done exceptionally well. The cocksfoot has filled in but is not as palatable for the animals.

The Averys have been very impressed with how this pasture has done during the dry years – but then they have looked after it well!

Marlborough got at least 25 mm of rainfall in mid-February with some areas getting over 70 mm. This has greened up the grass which has taken up the nitrogen that was released by the sub and soil through summer (photo below taken 28 February 2016). This happened over quite a bit of the north-eastern part of New Zealand so should represent what many of you will be seeing on your farms. The bare ground in between the grass plants is where the sub clover has regenerated from seed in the soil.

In the close-up below you can see that the sub seedlings are sitting quite high off the ground making them vulnerable to sheep grazing. So we don’t want to put stock in for a couple of weeks yet.

The key has been the preparation of the paddock before the strike of seedlings. Because the pasture is short the seedlings are receiving full sunshine to maximize their growth. Once the canopy closes over and begins to shade the seedlings out, a light grazing with cattle is recommended. They will tear the grass off and open the canopy up again allowing more light to the sub clover seedlings.

We want the sub clover to grow close to the ground so it can be grazed. Once the sub does that it will begin to form a rosette of leaves that covers the bare ground as soon as possible to out compete any weeds that may otherwise try to take over.